December 07, 2008
The Karate Kid changed my life.
The movie, of course. Not the Legion of Superheroes comic character.
I'm watching it right now as I type this blog and I was thinking about how many of my perceptions about karate were shaped by Mr. Miyagi. I was never big on "sports" movies, I never saw Rocky.
But I knew what it was like to be the little guy. The new kid on the block. And I knew what it was like going up against an institutionalized system of separating the "winners" from the "losers".
Luckily, I had friends in and out of school that liked me for who I was and not for who I desperately thought I wanted to be. It took me a little while and Karate Kid 2 to realize what I did want. The summer that KK2 was the summer where I decided to take control of my life and stopped worrying about what the @$$holes thought. It wasn't even a gradual thing. Once I had made that decision, suddenly things started changing around me. I had confidence and that made it easier to accomplish things which in turn fed my confidence. If there was one thing that fueled most of the bad decisions (mostly split-second decisions) in my life, it would be a lack of self-confidence.
Even now I sometimes have an art crisis where I'm not sure what I want to do. At those times I try to remember to listen to my heart. As Mr. Miyagi says when Daniel is worried about trimming his bonsai the wrong way, "as long as come from heart, never wrong". 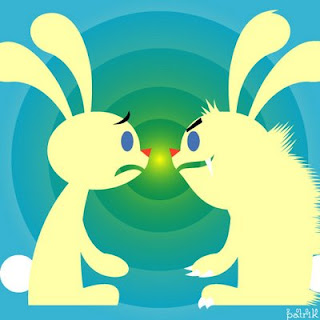 Today's illo I finished just as Mr, Miyagi was whipping those Cobra Kai boys' asses. As soon as I read the theme of these week's Illustration Friday, I had my image. When I thought of similar I thought immediately how similar means "not exactly the same", which says more about difference to me than similarity fro some reason. I seem to like to come back to my "everyrabbit" character. The poor bastich! I'm probably going to continue to put him through hell. If so, I should think about giving him a name...

BTW I have two pieces in a show at the Tokyo American Club Genkan Gallery going on now. It's the SCBWI Tokyo illustrator's show. It's the first time I've used gel medium to bring some texture to my work and it's also the first time I've had my work behind glass like in a high-falutin' gallery.
The show runs to Dec. 14th and my fellow artists are below. Please check them out.
and my good friendwho I owe apologies to for taking out the "c" in his name when I designed the postcard. Sorry!
Postcard art below: 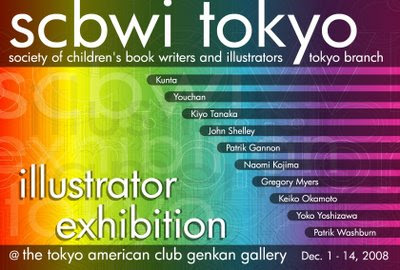 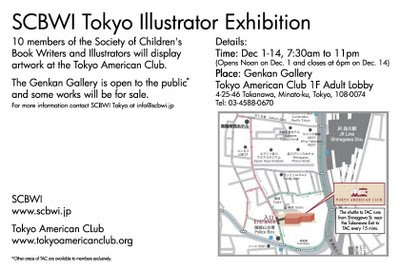 Patrick said…
The feeling is totally mutual, my friend. It's always a great time showing together.
December 9, 2008 at 5:37 PM

John Shelley said…
I never saw the Karate Kid movies but I can really relate to the "winner vs loser" thing. When Seren and I came back to the UK from Japan she went through a series of "you win you lose" things at her new school, which came as a great shock to her. At her old school in Japan there were rarely "winners" and "losers", everyone was made to feel like they'd achieved something.
One of the many things she's had to get used to the hard way. Even now she refuses to take part in birthday party games where only one person wins and the rest are "out".

BTW great work on the SCBWI flyer Patrik. Sorry if my surprise at not seeing any images on there came across as disapproval, nothing could be further from the truth. You did an excellent job on the design, in retrospect I think the design has much more impact than a bunch of thumbnails would. Well done!
December 9, 2008 at 6:30 PM

Thank you! I love putting that rabbit guy thru the ringer!