February 22, 2010
Hello, Nipponophiles!
Yes, that's what they used to call us back in the day. Which "day" are you talking about, you might ask. I'm talking about when anime fans were such a minority that Prisoner

fans used to give us a hard time. Nowadays, most Japan-o-fans are happy to be called "otaku". Well here on ARTokyo, I've decided to talk about what it was like to be an old-school otaku. Well, I used to be old-school, but now I'm just old. I guess that makes me an "ota-oji", as in "oji-san" as in old dude.
Now this old dude is gonna tell you about a favorite manga of mine by Masashi Tanaka. Learn all about him in this informative wiki article. Tanaka is best known for GON

, a comic masterpiece about a little dinosaur, which was one of the first manga to successfully crossover to the Western world if only because it didn't need any translation. There were no words! Console gamers might know Gon from his appearance in Tekken 3, but that's not what I'm here to talk about!
Before Gon brought Tanaka mainstream success, he created a different kind of comic for a totally different audience. "FLASH" was serialized from 1985 in Kodansha's Morning comic magazine and was collected in 3 deluxe-sized collections starting in 1986. It was labeled as an X-Western which is pretty accurate since it combines every Western cliche in the book with lots of sexy sexy sex. As far as I know, all the pre-Gon comics he did were set in the past and feature zeppelins, classic auto-mobiles, biplanes and such, but "FLASH" is definitely the most inspired of them all. FLASH is the name of the main character, a quick draw gunslinger who only fights when there's money to made, never says "no" to a roll in the hay, and just can't seem to die. He does get shot. A lot. The best way for him to heal seems to be to have sex with as many women at one time as possible. Did I mention that he's also a money-lovin' cheapskate and will dive into a hail of bullets for a dropped coin. Any coin. Not even a gold one. 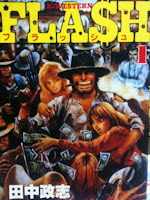 The action in this thing is hot and heavy and has awesome fights,  bad-ass villains, and more bullets than all the Tarantino

flicks put together (also has a lot more boobs

, yippee!). If you liked El Mariachi

, because of the ridiculous weapons or even more ridiculous action, then you will totally lurve FLASH. Compared to Gon, the penwork is quite rough, which means it's AWESOME and somewhat reminiscent of Kamui creator Sanpei Shirato

's later work.
['Scuse me while I switch inta ol' Western-like mode fer a bit. If'n ya don't mind, read the rest of the blog with the voice of Pat Buttram inside yer noggin'.] Now if this kinda comic isn't your thing, but you love dinos like Tanaka's more famous character - li'l lizards who are kinda ugly-cute and aren't into vocalizin', then at least take a look at the third collection which features "Junior", a bad-ass mini-dino who looks like he could be Gon's wayward older bruther. The biggest difference is Junior is all green-like and has some horns. Other'n 'at, they look alike. 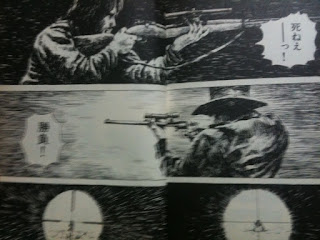 Now the bad news: FLASH is out of print along with any other Tanaka title except for GON. I've been a-keepin' my eyes out for his books at any used-book store I happen to pass by, but no luck so far. I need to replace my FLASH #1 as it's fallin' apart. I did find a site that lets you flip through a few pages of each title if you download a reader. I ain't heard'a nuttin' he's done lately, though I did hear a rumor he was trying to pitch an Ultraman comic series. I also heard it got shot down. Poor feller. It's not too late for him to go back to X-Westerns, though. We can always keep our fingers crossed.
I'd like to do some more reviews of lesser known comics, and throw 'em up here ever' once in a while. All you gots to do is drop me some words of encouragement here and there so I know I'm doin' some good for the world. You all have a good rest and I'll meetcha back here at the meetin' place at that same ol' meetin' time. Cheers!! and all that cal.