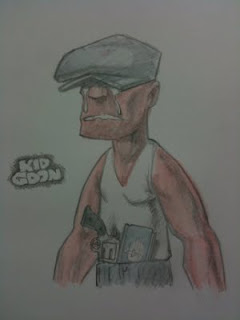 A scene from Goon's origin story from The Goon v3 #1. Ain't he just the cutest thang!

January 21, 2016
Of course, I'll always be a huge fan of Harley Quinn's original design by Bruce Timm. But the Suicide Squad design is based on Harley's recent look which is pretty awesome in itself.  Check out these screencaps from the new Suicide Squad trailer. It looks like she's a HUGE part of the flick. Carla Whatsherface's Enchantress (did not like her in Paper Towns so not expecting much from her), Will Smith's Deadshot (always watchable), Jared Leto's Joker (could be insane), Killer Croc, fire dude, whatever... Margot Robbie's Harley steals the show!
Post a Comment
Read more