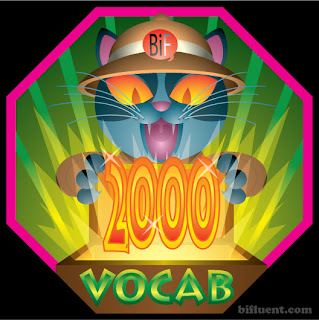 This is my entry for the Illustration Friday theme "Whiskers".
I created this kitty and several other kittycats for badges for the English study support site BiFluent.com.

February 20, 2019
And don’t forget the chimp, the gimp, and the swarms of six-legged creatures. Jennifer Connelly stars as Jennifer, an American at a creepy European boarding school (see Suspiria). She’s pretty and rich, but lonely. Her parents have abandoned her and she’s WAY too friendly with bugs.  What’s a girl to do? Why become friends with a slightly creepy entomologist dude, that’s what. I’m sure she only had an eye for his bags and for his cute assistant, a chimpanzee. Something that is now a thing, I’m sure. Like many Argento flicks, there are decapitations and attempted decapitations. Also lots of blood and broken glass. And mirrors. And useless cops. An excellent follow-up to Suspiria which I’d like to talk about in the future.
Post a Comment
Read more