More than just a revenge flick

September 03, 2014
The movie "Rolling Thunder" is one of those gems that you just don't hear about. At least I hadn't heard of it until my good buddy J.R. brought it over for us to watch. 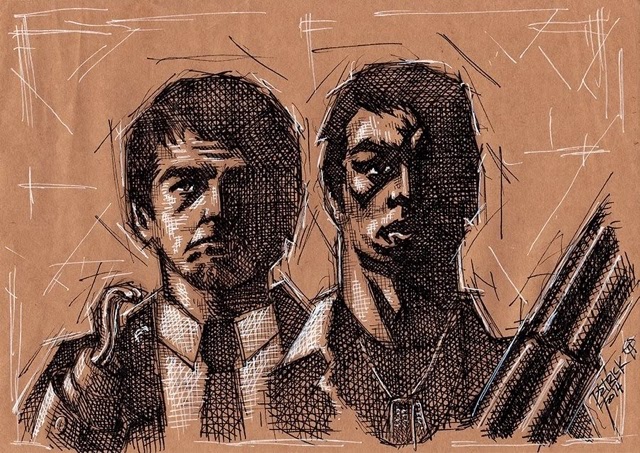 William Devane was perfect as the man who survived being a POW in Vietnam and is trying his god-damnedest to make it back in "the world". His wife has moved on and he doesn't really know how to relate to her anymore anyway. Tommy Lee Jones' character came back from captivity with him and he also has no idea how to lead a normal life. His wife and family are trying really hard to be loving and happy and are also trying to pretend that nothing is wrong. They are both completely numb, but go through the motions without complaint.
It takes murder, torture, and mutilation to push these men into action, but once the action is needed, they both slide so easily into combat mode that you can actually see the relief on their faces that they are going into life-threatening battle rather than having to face another day of forced normality.
Q. Tarantino called it "the best revenge movie", but it is so much more. My favorite moment in the whole damn thing is when Devane tells Jones that he's about to take on a whole bunch of baddies across the border and Jones replies simply, "I'll get my gear."
That's all he has to say and it speaks volumes. Young TLJ was amazingly skilled from early on. Compare him in this to his charming character in Eyes of Laura Mars. Both great but completely different multi-layered performances of complex characters. He's one of the few actors that can emulate pure visceral anger without changing his expression. Not one clench or furrow.
The violence is hard and is neither 80's fun, 90's slick, nor 00's stylish. It hurts to watch. There's no way to watch it and feel that it glorifies violence. The men don't treat the women very well at all and you know it's because the war and the torture stole their ability to relate to anyone except for someone who's been through the same thing.
I highly recommend this movie to fans of movies.
Trivia: The opening theme, "San Antone" was also used in my favorite movie of all time, "The Ninth Configuration" AKA "Twinkle, Twinkle, Killer Kane".