Chances are it’s only your first or second time to visit and how could I blame you? This blog has been all over the place since I first started it way back when.
I use it to talk about my art, my writing, my charity work, and my adventures in and around Japan. Since right around the time of the Kumamoto Earthquake, I’ve been introduced to a whole new world - the world of comics scholarship.
I gave my first lecture in May 2016, which was on horror comics history, at Kumamoto University. It went over well and once the Kōshi Manga Museum was opened in 2017, I gave a shorter version of the same lecture combined with a fun workshop there. Based on that I was invited to give a series of 6 monthly lectures at the museum starting in Spring of 2018.
I continue to find comics history and scholarship fascinating and so, for the time being, you can expect more posts on comics.

Without further ado, Here’s a rare manga (likely can be considered akahon* based on the young target reader) lent to me by the vintage collecter Mr. Fujita who lives one town over. This book is a great example of the level of 'underground' that comics could be in the fifties in Japan. Yes, there were tons of fly-by-night publishers in the forties and early fifties in the US that were trying to get in on the comic book craze and this is a similar development. The factors that effect comics are basically same - talent pool, printers (technology), and distributors and the differences in these are likely what affected the differences in US and Japanese comics developments. Other factors include paper availability and censorship.
Basically, what I want to say is that I couldn't find much about the publisher and even less (meaning nada) about the creator or characters except what was written in the comic itself.
*check out my previous post on another probable akahon. 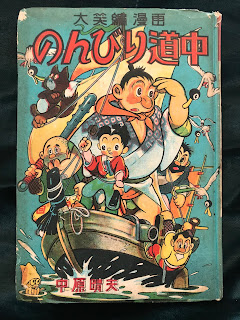 I love the 1950's Japanese synthesis of early 30's animation styles apparent in this cover. Trying to track down the influences led me down a huge rabbit hole which I will hopefully put down in the next post or so! The colors are really nice and the character design is solid. Of course, the interiors are much rougher. 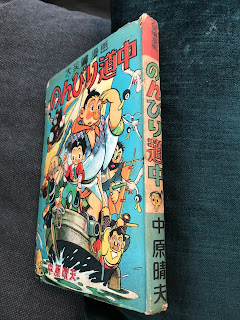 It's a thin cardboard cover with the supratitle saying 大笑編漫画 which I will translate to Big Laughs Collection Manga. The author is listed as NAKAHARA Haruo (中原晴夫) who doesn't come up in any manga-related searches. It's possible that this a pen name (or an alias, hehehe), but who knows. Just because I can't find it online, doesn't mean he didn't do more work. As I increase my access to more vintage manga collections, I might come across his name again, but until then...
Mystery #1! Who is this Nakahara guy? 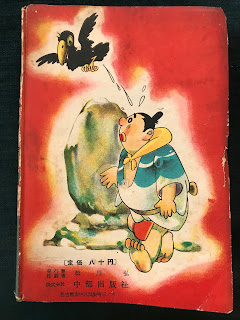 The back cover is a very tasteful rendering of a crow taking a mid-flight dump on this poor fool's head. The back cover lists the price, 80 yen (a common price for akahon of this size, 100 pg B6), the publisher in charge, MATSUKAWA Hiroshi, and the publishing company, Chūbu Printing (中部出版社). Chūbu means the center area of Japan and usually means Nagoya, the 4th biggest city of Japan.

According to Kanke Shobō, a rare and out of print comics shop in used book mecca Jimbōcho (Kanda, Tokyo), the publish date for “Nombiri Dōchū” (のんびり道中) which can be translated as “Carefree Journey” is unknown. I searched for the publisher and found a few items including mention of reprints of popular manga material such as “Pete's Castaway Adventure” (ピート君漂流記) which is a reprinting of Shintakarajima by TEZUKA Osamu. The publisher in charge is listed as MATSUKAWA Hiroshi again, but the kanji of the given name is different (松川 宏)!! Also, according to this listing on Mandarake's auction site, the address of the company has also changed slightly.
Mystery #2! Who is Matsukawa and why the name change?

Rare manga researcher NANBU Kan'ei @kan_ei_sen in a tweet about another book by Chubu, mentions that they probably published works without permission. That statement holds up based on what little we've discovered so far, eh manga travellers?
Mystery #3! What's the deal with this publisher?

Okay, let's take a look inside. First of all, some neat endpapers which combine two favorite themes of mine: rockets and cowboys. There are a lot more connections between the two than you might think (but not as many as Cowboys and Ninjas!! More on that in the future.) [BTW: See Kerrigan's Tezuka in English blog post on Captain Ken for my all-time-favorite TEZUKA Osamu comic which features both rockets and cowboys.] 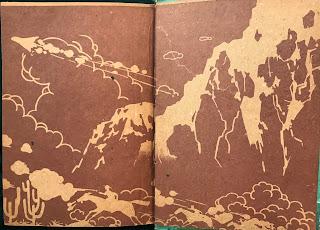 Here's the title page showing our hero (whose name is either Sasabei or Sasanosuke, could be both?) taking on an ogre-like samurai (or samurai-like ogre)  by cutting his club to pieces. 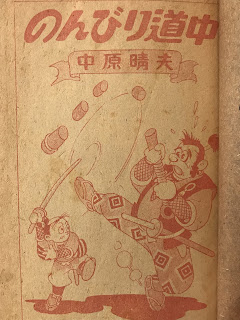 The first chapter has Sasabei putting on a one-eyed mask to help catch the shapechanging fox which has been plaguing the villagers with his mischief. What is very strange to me is that the book reads from left to right as manga should, but the panels themselves read right to left with people on the left answering questions posed on the right.
Mystery #4! What's with the backwards dialog order? 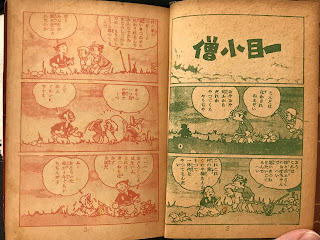 The last page of the Sasabei story has him giving advice to young readers saying「失敗は成功のもと」(mistakes are the foundation of success). Can't argue with that. Not a-tall. 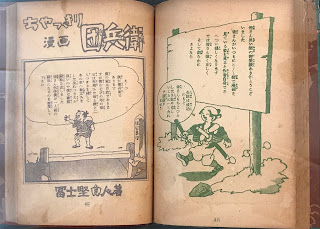 The second half of the book starts here with a story about Chakkiri Danbei by someone named FUJIKEN(?) Hakujin(?). The third character from the left is a character which I've seen before (in some name listed in MATSUMOTO Reiji's comic history encyclopedia) but can't find the reading of. The next time I'm with a Japanese language expert, I'll ask about both this and the character that looks like jin or hito (person) but has two extra strokes attached. No one I've asked so far seems to know what this is either, but my brain is telling me that I've seen it before somewhere. If it is just another weird way to write 'person' than we still have a creator whose name is White-Guy.
Mystery #5! What are these crazy kanji?
Chakkiri is either a kind of funnel or slang from Shizuoka prefecture found in a popular song from the 1920's. I'm really not sure how either relates to this happy-go-lucky fellow.
Mystery #6! What is chakkiri?

Danbei is a poor kid from the country who gleefully announces on the first page that his father has passed away leaving him and his poor old mom to fend for themselves. Look at his happy exposition face! Something tells me daddy was a good-for-nothing. Anyhoo... Danbei's dream is to become an ōzeki, a high-ranked sumo wrestler that is just below the highest rank yokozuna (grand champion), and then have the means to take care of his mom. 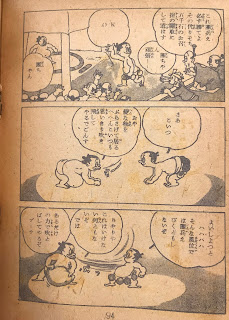 He certainly has the belly for it. And he has a big tummy, but not as big as his opponent who is threatening to knock him out of the ring. One thing that struck me about this page is the anachronic use of "OK" in the top panel. Seeing that there is a daimyo lord that is offering Danbei a huge reward if he wins the bout, it can't be the modern era and so "ok" wouldn't make much sense, but it's true that manga pioneer Tezuka himself would constantly mix in anachronisms in his comics for comedic effect. The round things Danbei is wearing around his waist are weights which is what keeps him from being knocked out of the ring by his larger opponent. I'm pretty sure that's cheating, but it's a Looney Tunes sort of cheating and I'm sure we're supposed to cheer on or laugh at Danbei's cleverness. 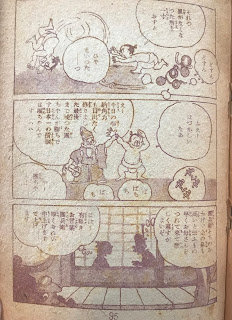 Here, he flings off the weights and the unburdened Danbei easily flips his opponent out of the ring thus winning the tournament and gaining not ozeki but yokozuna status, the very top rank you can earn. The daimyo is highly pleased as he's openly supported Danbei and now has earned some major bragging rights. He suggests that Danbei rush home and tell his mom the great news and bring her back to live with him. 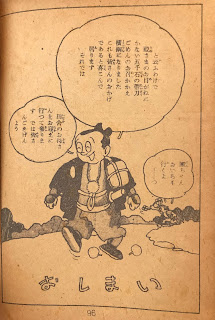 And here he is on his way home to surprise his mom with his new status and a hefty bonus from the daimyo. He leaves off by thanking the readers for cheering him on.
The second half of the book doesn't have the subtle washes or even the same level of rendering as the first half, but the word balloons read right to left as they should and so it's obviously from a different creator and/or a different publication.
Either way, I was stymied by many of the things I found in this volume and that probably means I still have a ways to go to earn my manga scholar wings.
I hope you enjoyed this excursion and I'll be back next time with more mysterious comics.