January 01, 2019
According to a post by akahon manga researcher Yuuzora Retro (pen name), the Tokyo-based publisher Taikōdō (泰光堂) created their Manga Classics series in response to the PTA backlash against manga contributing to delinquency in Osaka.

This is Gulliver’s Travels by NAKAMURA Hiroshi (中村ひろし), a B6-sized 3-color akahon* printed with red ink fills on either blue or green lines costing 85 yen. 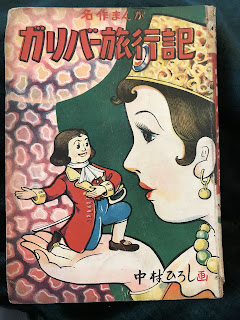 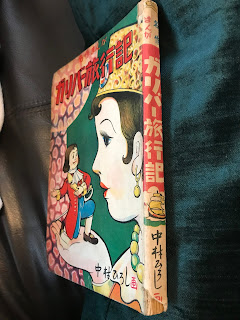 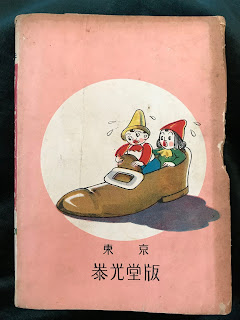 NAKAMURA seemed to be the main artist for Taikōdō as evinced by the ad pages at the back. 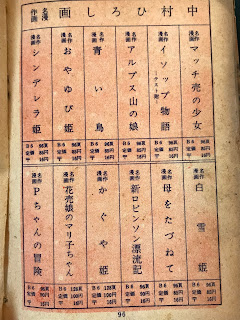 There is no publishing date, but it probably wasn't too far from 1951 when "Cinderella" and "Snow White" from the same series were published. 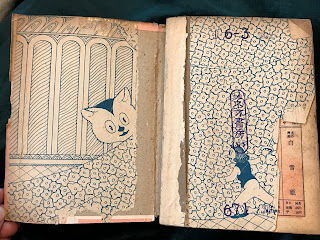 Looking at the stamps on the endpapers on the back, we can see that this particular book was rented out at a kashihon-ya (rental comic shop) in Saga, Kyushu called Imazato Neo Shobō. It was lent to me by a Mr. Fujita, a collector heavy into Showa-era items. I will continue to introduce the books I was able to borrow from his collection until it joins the display of early Showa comics at the Kōshi Manga Museum (合志マンガミュージアム) where I often give lectures about comics history. 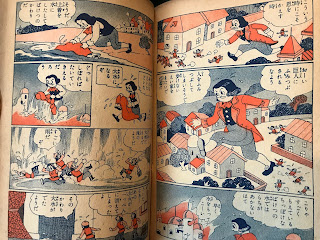 The story focuses on the most visually fun parts of the Gulliver story, namely when he visits the teeny-tiny Lilliputians and the huge Brobdingnagians, people who make him look respectively huge and tiny. The line work is simple, likely to match what the printers were capable of for this smaller press, but the artwork itself is better than many of the same era and distribution type. The layouts are lively and have depth and the figures themselves are dynamic. The style itself seems to be inspired by 1930's animation by Fleischer Studios, as were many manga of this period, including the 1938 feature "Gullivers Travels." 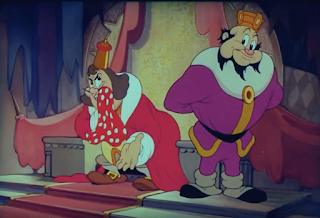 I'll be doing more posts about manga on this blog so visit us again. Cheers!

*I'm calling it an akahon based on the abundance of red ink and the commentary by Yuuzora Retro referenced above, though you could call it a kashihon manga as it was lent out at a kashihon-ya.
**For more info about akahon, here is an article about akahon at The Comics Journal by manga scholar Ryan Holmberg.