5. Outland (movie) -
Sean Connery must weigh his thankless job against family (good-looking
wife and son who is too dorky-looking to be believable as from Connery's
hallowed loins) and survival. Of course he chooses the option where he
must face down a team of assassins at high-noon on a mining station on
Io, one of Jupiter's moons). No cowboy hats or six-shooters, but it is
very much a wild west type of scenario where the new Sheriff must deal
with the land baron's evil henchmen and the townsfolk and deputies won't
lift a finger to help, and there's space heroin and exploding heads...
Okay that last part doesn't happen so much. I still enjoy seeing this one
every once in a while. Connery is always awesome and best slomo head
explosions ever (other contenders - The Fly II and Scanners)!!

4. The Wild, Wild West (television NOT the movie!) -
When I was quite the youngun' I would flip the channel on this show
the second the opening finished. The opening was animated, and to change
the channel on animation would have been sacrilege! Then, as a teen, I
accidentally watched a whole episode and I fell in love with the show!
Of course, by that time I had gotten over my fear of westerns, but it
was all the cool spy stuff, and evil organizations, and techno-gizmos
that stole my heart. AND the fact that the leading dude, James West
(played by Robert Conrad), was the kind of guy I always wanted to be -
a guy who's tough on the outside, tender on the inside, and knows how
to work a pair of tight pants. And I always wanted my own train and a
sidekick who's not afraid to dress like a lady (or a pirate, or a corset
salesman).

3. Star Trek: The Next Generation "Fistful of Datas" (television) -
If you've never seen Star Trek:TNG because you were born wrong (too
early or late), or because a hardcore fan tried to convince you to watch
it and that crazy gleam in their eyes gave you the willies, you are not
alone. There are people out there who are essentially afraid of Sci-fi
and Trek in particular. I've watched peoples' eyes glaze over as I tried
to explain how it's a show about people and not just about pointy ears,
blue antennae, and lobster heads. The show began in 1987 and ran for
seven seasons. It got off to a shaky start and I admit that I had no
interest in the show until I started watching the fifth season (another
story for another time). From the third season on, the show grew by leaps
and bounds and so did the characters. This show is about growth. And over
seven seasons you get to see the android Data become more human, you see
Troi become more independent, Riker double his waist size, Worf grow some
cool hair, Wesley grow some pubes, and Captain Picard become more human.
Actually, the story of Worf is probably my favorite as he does the most
growing. He has to learn to deal with being a stranger in a strange land
(much like Spock in the original series), has to question his own beliefs,
has to learn how to braid his hair, and has to learn how to be a father.
In "Fistful of Datas" Worf takes his son on a holodeck adventure to the
wild west. Worf and son Alexander are the new Sheriff and his deputy and
joining them is Deanna Troi as the mysterious stranger. When something
goes wrong with the program, they must defeat Data's programming or be
shot in the street like dogs (see Westworld above). This is a fun episode
without too much moralizing, but also has some tender father/son moments
as well. Troi as a rifle-toting bad-ass is my favorite part and it's also
the photo I had her autograph when I saw her in Seattle. Oop! I see that
your eyes are glazing over. Next!!

2. The Dark Tower series (novels) -
"The man in black fled across the desert, and the gunslinger followed."
One of my favorite first lines of a novel ever. Thus begins the saga of
Roland and his ka-tet (group bound by destiny) who must travel across
the world which has "moved on". This series is Stephen King's life work
and one which I thought he would never finish after the third book. I
sure did wait long enough. But finally he came out with the fourth and
after a few years came out with five, six, and seven in quick succession,
finally bringing the saga to a close 30 years after the first book
appeared on stands. This is probably my favorite fantasy series (it is
so much more, sci-fi, western, fantasy, and horror as well) but has
plenty of western elements and sci-fi elements to make this list. If you
are a King fan, then you'll love how this series ties in with so many of
his other books. He even brings back some characters from some of his
earliest works. The first cross-over I noticed was Flagg, the Dark Man
from "The Stand" (still King's best book and definitely his scariest
villain), who showed up in "The Eyes of the Dragon" and who is also the
man in black from the first line of the Dark Tower series.
There are just so many wonderful moments in the series and it's also
some of the most satisfying and scariest work King has ever done. It
also happens to be illustrated by Michael Whelan, who is one of my
favorite cover artists ever (and who I finally met in 2007). I haven't
yet, but I plan to pick up the comic series based on the Dark Tower
saga and I hope I can convince some of you to pick up the first book in
the series and see where it takes you. 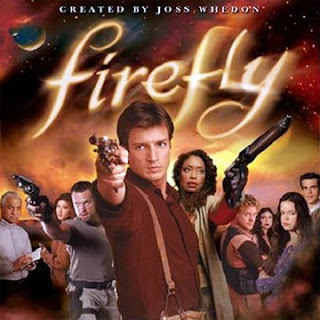 1. Firefly/Serenity (TV/movie) -
Hands down one of the best SF shows ever. Former browncoat
(basically, the losers in an inter-galactic civil war) now smuggler
Mal, captains the Serenity, a firefly class transport with no weapons.
His crew are a ragtag bunch of unique individuals, each adding their
own wonderful piece to the glorious whole that is the show Firefly.
Smart and funny with fun action, the best dialogue ever on television,
and some excellent drama. The show was so good that the brainiacs at
Fox network pulled the plug on the show before it could find its
audience. All 14 episodes (only some of which were aired) are
available on the hit DVD, the success of which paved the way for the
Serenity movie (also excellent). Besides featuring the only main
character with the name Washburn(e) in TV history, this show is just
one great show after another. Mal (Nathan Fillion) does Han Solo as he
should be - no namby-pamby "Greedo shot first" crap. He knows, just like
Tetsuro, that space is a cold, hard place and if you want to survive,
you have to adjust. The challenge is to keep your humanity intact. Fans
(aka Browncoats) still celebrate the show with websites and annual
conventions and I completely understand why. I rewatch the whole series
every once in a while savoring every line, every scene. Did I mention
that the actress that plays Inara is the culmination of every "woman of
my dreams" that I ever imagined since I first fell in love with
Battlestar Galactica's Jane Seymour in 1978. Wash is full of snarky
goodness, Jayne is refreshingly honest on his pursuit of wine, women,
and wealth, Book is wise, River is creepily sexy and vulnerable, and
Kaylee is spunky cuteness done right (meaning in a way that doesn't
make you wanna blow chunks). This show ended way too early. I hope they
do another flick. Again, deeper analysis will require another blog entry.

What do you think? Are there any I missed? Feel free to comment about
your own top 10.
PS. Honorable mention: I haven't read "Cowboys and Aliens", but it looks
pretty good and the movie adaptation is gonna be awesome with Jon Favreau
directing and Daniel Craig starring! (UPDATE: it wasn't awesome, but just ok...)