September 01, 2010
[Note: Check This $#!% Out was originally a seperate blog but is now a feature of patokon blog]

I'm hoping that "Scott Pilgrim vs. the World" doesn't disappear from theaters quite yet. I love the premise - guy must defeat all seven of girl's exes in order to win her hand. I love Michael Cera, Dork Genius. I love the idea that the film lives in a comic-booky, 80's nintendo-ey world where sound effects and old school emoticons run rampant and where (according to the director) people break into fight scenes instead of musical numbers to express emotion. 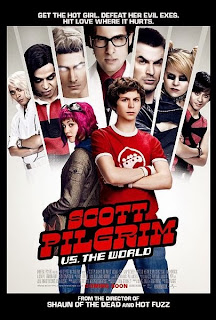 I live in Japan so I'm not sure when I'm gonna see it, but I already tried the game and it was

the $#!%. I'm more of a board gamer/role-player kinda guy, but I used to rock an Atari 2600 and though I have a Wii, I'll never forget my old nintendo famicon. I almost bought one last week in Aki (akihabara, the otaku mecca sometimes known as Akiba, but actually really truly pronounced AkiBAhara until several people died of brain hemorrhages tryng to say it that way. Sideways rant here - stop calling it AkihaBAra. It's like how I used to pronounce origin. I used to say oRIgin. That's like saying, "lemme take a phoTOgraph". Just say akiHAbara and you'll approximate the actual pron of the thing. Rant over.).

Don't let Scott Pilgrim suffer the fate of The Princess Bride and Firefly who didn't get the audience they deserved until they hit video and DVD respectively. Hit that $#!% while it's still in theaters, people! Oh, and if you download in-theater flicks off the net or buy them on DVD for a dollar in Bali, if you like what you see, go see that $#!% in the theaters, too! We need more movies like this that take chances! I know what you're saying. Why should we listen to a guy who hasn't seen it yet? Read some reviews of people who have, then! You'll be just as excited as I is!

Somehow I get a vibe something like the great John Cusack trilogy of the early 80's: The Sure Thing (awesome scene), Better Off Dead (scary paperboy scene), and One Crazy Summer (animated scenes). Those comedies had a great mix of unreality, were funny as $#!%, and were still basically love stories.

That's all for this time, folks. Don't forget to