September 04, 2010
[Note: Check This $#!% Out was originally a seperate blog but is now a feature of patokon blog]

Since I was a little, little kid, I was fascinated by monsters. I don't know what touched it off, but being scared was one of my favorite pastimes. I realized early on that of all the classic monsters, The Wolfman was my favorite. Lon Chaney, Jr., son of make-up master "Man of a Thousand Faces" Lon Sr., played Larry Talbot, a poor sunovagun who... you know the story. He gets all hairy and loses all reason, acting only on primal urges. Hey! Just like puberty!
Frankenstein's monster was butt-ugly, Dracula was evil (and old), but Wolfie was a sympathetic character much like the Hulk, who struggles with the awful realization that he might be a vicious blood-thirsty killer. Also, he was cool!! If I had to choose which character to play, would I want to be stoo-pid monster, aloof and snooty vampire, or wild animal-man? Let me think... oh yeah, WILD MAN!!!!! But that's just me. Sure vampires brood nowadays and whine about their bloodlust and stuff, and the Monster has been returned to his roots (in the original book, he can talk and think and plot cold, cold, nasty-sweet REVENGE!!!! but I digress), but Wolfie was a clear representation of how man must overcome his animal urges and stop watching so much prOn!! 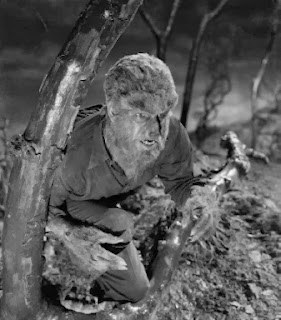 Ahem. I grew up idolizing Lon Chaney Jr. and The Wolfman and I devoured almost every lycanthropic masterpiece and crapfest that came out. There were a few I missed, but I was pretty sure I was up on my shape-changers. OR SO I THOUGHT!!

At last year's Tokyo Anime Festival, I ran into one of the Brothers Higa and he told me about Spanish actor Paul Naschy who only played werewolves!! Actually he did play other parts, but he was most well known for his character Waldemar Daninsky. The character debuted in "La Marca del Hombro Lobo" which was released in the States as "Frankenstein's Bloody Terror". If you get the US dvd, it explains why the distributor slapped a Frankenstein name on the poster. In an animated opening in the beginning, it explains that after the Frankenstein family gets cursed with lycanthropy, they become Wolfenstein!! (Didn't they have a castle?). Naschy is amazing! Oliver Reed amazing! I'm right in the middle of "Night of the Werewolf" and it's super mondo awesome!! It combines the gothic atmo of Hammer Horror with hot chicas! While Hammer had only Catherine Munro to keep up the sexy quotient, Naschy throws in a bevy of beauties - some good, some evil, all easy on the glazzies. I can't wait to get my hands on more Naschy wolf fare (in English). His flicks really hit the spot after running out of Hammer flicks to watch. 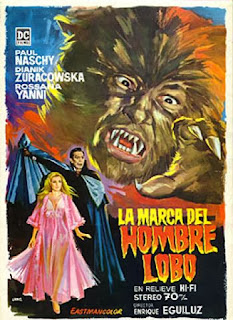 BTW, I like to link to all kinds of funky $#!% in this blog, so don't be afraid to click here and there. You might learn something.