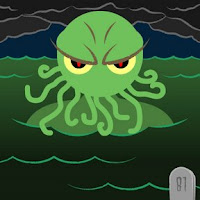 I'm pretty sure that H.P. Lovecraft, creator of the evil book Necronomicon and the Cthulhu mythos, actually saw into another world. As I read his books, I feel myself being drawn into that world, and I fear that I might not escape. Such is the power of Lovecraft's imagery. His character's are amazingly real and often irredeemable bastards. Going by his books, you definitely get the impression that H.P. was qute the racist. Many books I've read from that period express similar sentiments. It's often hard to deal with such things. I've known people I've thought to be good and decent, but have hatred or fear of people of other backgrounds. I've been told to hate the sin, not the sinner. And that's what I try to do.